Rowland Garza was elected to represent the City of Del Rio, At-Large Place B on May 12, 2012. Councilman Garza was born and raised in Del Rio, Texas. He is a 1996 Del Rio High School graduate, a 1999 graduate with a Bachelors of Arts in Education from Sul Ross State University-Rio Grande College and a 2004 graduate of Sul Ross State University with a Masters of Arts in Public Administration with Honors.

Councilman Garza has been active in state and federal politics, municipal government and state government, and multi-media marketing over the last 19 years, working for the City of Del Rio as Marketing Coordinator, Assistant Parks and Recreation Director and Assistant to the City Manager, and as the Political Director/Community Office Director for the Honorable Mayor Julian Castro of San Antonio, Texas. Presently, Councilman Garza is the Emergency Management Coordinator for Val Verde County, as well as the Sales/On-Air Manager for MBM Radio.

He and his wife Viviana, who is a registered nurse at Val Verde Regional Medical Center, have been married for 9 years. They are the proud parents of 5-year-old daughter Victoria and 2-year-old daughter Valeria. They welcomed their third child in February. 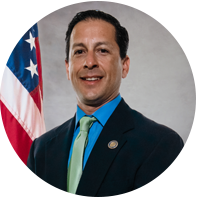