Bruno “Ralphy” Lozano was elected mayor of Del Rio on May 5, 2018. Mayor Lozano made history as the youngest elected mayor in Del Rio, Texas at age 35. He also made history as being the first mayor to graduate from the new Del Rio High School, which was established after the two local school districts were consolidated to make our current San Felipe-Del Rio Consolidated Independent School District.

Mayor Lozano has been committed to public service throughout his life. He has served in various organizations such as raising awareness to Alzheimer’s disease, humanitarianism outreach, Casa de la Cultura’s Creek Clean-up programs (local program) and more. Mayor Lozano also served our country when he was enlisted in the United States Air Force. Apart from being mayor, Lozano is employed in the airline industry, having traveled to over 30 countries in the past twelve years.

Bruno Lozano is a Del Rio native. He is the proud son of Bruno and Paulita Lozano Jr., as well as grandson to Bruno and Monica Lozano Sr. and Chema and Elida Suarez. Mayor Lozano has a total of three siblings and 13 nieces and nephews. Mayor Lozano is a proud 2001 graduate of Del Rio High School.

Mayor Lozano is committed to unifying the council and the city effectively. He is committed to ensuring that economic growth prevails along with international trade within our region. Additionally, he makes military support, transportation, and mental health, among other key issues, a priority. Mayor Lozano currently chairs the the Ports-to-Plains Segment Three Committee, International Bridge Board Committee, and represents the City of Del Rio at various organizations, including the Middle Rio Grande Development Council Board of Directors, Border Trade Advisory Committee, Binational Bridges and Crossings Group (BBBXG), Ports to Plains, and others. 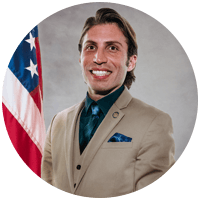